Bitcoin is navigating choppy seas, with waves of conflicting sentiment rocking the market below the critical high watermark of $60K.

Prices sank to lows of $50K early in the week on mixed headlines. Two top-tier Wall Street banks announced they were filing for Bitcoin ETFs, while Ray Dalio warned that in “a certain set of circumstances” the cryptoasset could be banned in the U.S. 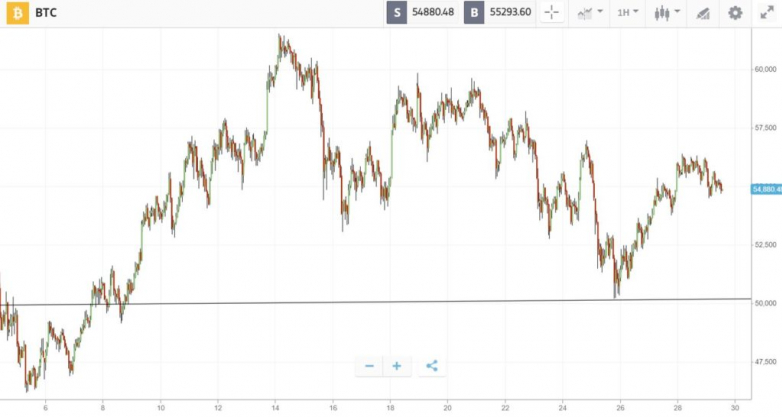 Both Goldman Sachs and Fidelity filed Bitcoin ETF applications with the Securities and Exchange Commission (SEC) last week, raising hopes that the long-awaited investment vehicle could finally be approved.

Widespread availability of such an ETF is expected to open the floodgates for more money to flow into the market, allowing investors to indirectly buy Bitcoin without having to set up a wallet, and add the cryptoasset to traditional retirement and tax-free savings accounts.

In total, there are now seven ETF applications waiting to be processed. Although the SEC has refused to approve any so far, the new applications from two of the largest asset managers in the world could be considered differently.

Tesla added Bitcoin as a payment option last Wednesday, and cemented its commitment to cryptocurrency with two more bombshell announcements.

The carmaker will not only follow best technical practice by running its own Bitcoin node, but will buck the trend of merchants converting to dollars and “HODL” the Bitcoin it earns from car sales for the long-term.

Although some suggest Tesla is unique in this regard, traders will be watching General Motors closely after CEO Mary Barra said in an earnings call that there is “nothing that precludes” the carmaker from accepting Bitcoin assuming “strong customer demand.”

Following the fireworks of January, Bitcoin hasn’t delivered the same explosive gains in February and March. Yet historical price data suggests April could bring better market conditions. Bitcoin has made gains during this month in the last eight out of ten years, rising around 40% on average.

Veteran trader Peter Brandt has also suggested rising prices could be on the agenda. Speaking with Real Vision on March 26th, he compared current price action to the “midpoint pause” of 2017, claiming Bitcoin could be expected to make another big move upward in coming weeks.